Spring break came and went at my house. There were always our five kids, along with their friends or numerous cousins over here hanging out. Needless to say, I got NOTHING done!

My husband decided that he would take a week of vacation the following week. Needless to say, I got NOTHING done!

I long for the day when I have my house to myself again. No kids, no husband, NO ONE!

Lisa asked me the other day if I didn't go insane staying at home all the time. It was an easy answer for me. NO! Emphatically so. I am such a home-body. I like to be able to do my thing, whether it's sitting at the PC, talking on the phone, or just some project around the house. I think I got all of that going going going out of my system when I was younger.

Well, my self imposed deadline to finish my revisions came and went, and I haven't even touched them in over two weeks. I should feel guilty, but alas, I just don't. I know that as soon as I regain my house, I will continue to trudge through them, I'll just have to give myself a kick in the rear end when the time comes. Till then, I have been reading, reading, reading.

I read the BEST book (out of the half a dozen I've read in the last week)! It is by C.L. Wilson. It was book 2 of her Tairen Soul Series (didn't know this till I was finished, I HATE that), Lady of Light and Shadows. I have now ordered the first, Lord of the Fading Lands and can't wait to read it. It's a very "Lord of the Rings" type book, but better. She has now been put on my favorite authors list and look forward to the two more books coming out in the fall.

I originally started this blog to track my writing progress, however, since I am so ADD, I can't seem to stay on topic even HERE!

Now I feel that I must at least post every once in a while about The Crichton Heir, and the progress, or often lack thereof, during the daunting task of revising the finished manuscript.

I think I may have written before about how bad the first dozen or so chapters were. They were REALLY bad. I have now completely rewritten the first nine chapters, and am almost ready to tie them into the original.

The other night, I sat down, and read all of it out loud to my MIL (a big thanks to Lisa, who was here and decided to read the conversations taking place between the characters, using what started as a pretty good Scottish brogue, although it did take a turn toward an English/Irish combo accent before it was done).

When you read something over and over from a computer screen, you tend to miss so much! I had printed it out, and grabbed up my handy red pencil, and made corrections as I went. They were all minor, but boy did they add up.

I still need to make the corrections on the PC, but I feel much better about the so far finished product.

I also wanted to point out the GREAT post on Mary Duncan's site (http://eyesofgarnet.blogspot.com/). She has a FANTASTIC picture of a man in a kilt, well, half way in a kilt, he he he :)...LOVE IT!

Spring break started on Friday for my kids, so not sure how much work I will get done. At least I don't have to get up early, so hopefully I can work at night more often this week. I had the goal to finish revisions by March 24, not sure if I'll make it, but I haven't thrown in the towel yet!

It's Official...Girnigoe is a PERV!

Took Girnigoe to the vet (if you are confused, read previous post) today. She is fine, though it seems she may have suffered through a false pregnancy during her last heat. I have the go ahead to breed her, on the condition it is with a smaller male (God knows she needs to get some). There were no issues, physiologically anyway, and she got a clean bill of health.

Kid's are out for spring break (JOY), so I am not looking forward to my house being over-run by them and their friends. If they get wind of my dog and her talents, God only knows my son will charge his friends admission.

On a writing note, I haven't started Chapter 10 revisions yet. I'll get there, but life so seems to always get in the way.

Doggie Porn...Possibility for a New Genre? 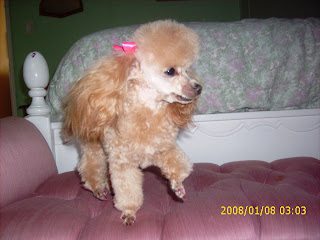 This is Girnigoe, isn't she soooo adorable (don't answer till you read the entire post). She weighs a whopping 2.5 pounds. She is my baby, always in my lap, follows me everywhere, and frankly, I like her more than my kids most of the time (Okay, I LOVE my kids, but if you have them yourself, you know what I mean).

Being as small as she is, I have gone back and forth about breeding her. I would have to find a male that is smaller than her, not an easy feat in itself. That being said, I have not had her spayed and she has now had two heat cycles.

I have made an interesting observation with this precious wonderful little baby:

OMG...this dog has many "special friends", most of which are beany babies. I have never seen a female dog hump so many things! I will say that her activity has let up substantially, but with that has come a new problem.

As she lay on my lap one evening, she did that inherent dog-thing, by rolling into a ball, to be able to lick herself...just like a boy dog would (hell, just like MOST men would if they could). Then the weird convulsions started. Her leg that was behind her ear was floppin, she even made a few grunting noises, and was rocking back and forth.

Ok, at first I thought, hmmm, must call vet...urinary tract infection or some such thing. But as this behavior has continued, I have realized (gasp) that my dog is getting into the whole licking thing, and I mean REALLY getting into it.

I know that those of you who know me, must be thinking it's all a figment of my gutter-brain, but if you could see this dog go to freakin town, you'd most certainly be appalled, but also would whole-heartedly agree that either she needs a lil boy doggie, or maybe some "boom chicka wow wow" music.
Posted by TerriRainer at 10:18 PM 5 comments:

Title of Nobility and The Peerage

Why is it that almost all historical romances have Lord this and Countess that? Is it because here in the states, we don't have a royal family, or nobles? I'll admit it, I am guilty of fantasizing about being descended from some royal line (I'm NOT, of course).

That being said, I spent hours upon hours yesterday doing research. The whole peerage thing gives me a headache. So many rules, so many titles.

I miss the days of 8th grade Creative Writing class. Back then, You could simply write things about Duke Whatshisname and Duchess Youknowwho. Not now...oh noooooooo, it must be His Grace, So and So, the Duke of Whatever, or The Honorable Whoever, Earl of Somewhere.

Now, I do realize that you can take a certain creative license, if you will, while writing. But who wants to write a book that a reader takes one look at and says, "Now that is historically inaccurate, Duke Whatever was a flamer who never had kids". UGH. So I did take certain facts, and did take some creative license, and voila, four Advils later, I have characters that I think have believable, if not a bit vague, lineage's.

I'm sure that if an editor gets hold of this one day, I may have serious issues, but I have spent enough time away from revising and I WILL start plugging away again today.

Chapter 9, here I come, armed with a cool lineage, and the arrival of one Thorina Beauclerk , Duchess of St. Albans...poor woman was widowed in 1787 when her 28 year old husband took ill, George Beauclerk, 4th Duke of St Albans.

Sound believable? The only part I made up was Thorina...that particular Duke did actually die at 28, in 1787, unmarried with no children, and the title became extinct (who knew titles were endangered?).

Okay, I decided that I would post the first part of Chapter 1. This would be when Margaret and Patrick meet.

I am still busy with revisions. Working on chapter 7 now. UGH!