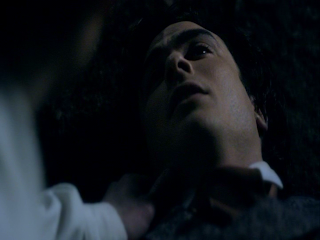 The blood had all but drained from his weak body. She knew he was dying, truly dying. She cradled his head on her lap, brushing dark hair away from his face; he was even beautiful in death. Her heart was broken; shattered into a million pieces. He had saved her life, but the cost had been great. His eyes fluttered open. 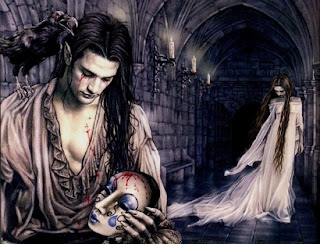 “Forgive me” he whispered. She could not. She would not lie to him as he had to her.
“You know I’ll love you for a thousand years.” She whispered back, and kissed his forehead.
It was true. She would never stop loving him, long after he was but a memory; he would still be in her heart, all those broken shards that ripped at her insides, making it hard for her to breathe. But she would never forgive him. She never could. 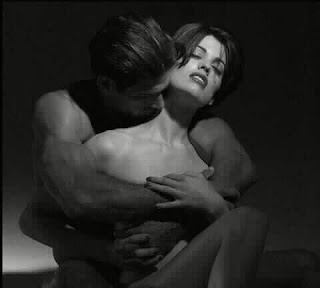 Finding it too hard to say more, she remembered a time when he had been her salvation; a time when he had been her knight in shining armor. Not the tarnished shell of a man he had become, but the one who had held her heart, her happiness, in the palm of his hand. She had trusted him with everything. In the end, it was her life he had saved, not her heart.
He reached up with the last bit of strength left in his body and gently stroked her cheek before his hand dropped back to his side as she watched helpless, the rest of the blood draining from the grievous wounds. Sobs wracked her body. A sudden panic overcame her. How could she live without him? 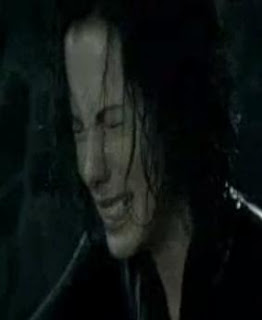 “Please…don’t…leave…me…” She cried.
“No no no no no no…”
Clutching his head to her breast and rocking back and forth, she raised her face to the stars. Tears ran in rivers down her cheeks. She let out a wail that was torn from her soul.
She was unsure how much time had gone by before any coherent thought returned, breaking through the fog of her loss, but when it did, she knew it was not over. She would now have to hunt down and kill the other half of her heart. She had no choice. In the end, she would forgive neither man, but would love them both, even in death.

Posted by TerriRainer at 11:27 PM No comments:


I spent the weekend working out a few major plot points to the story I’m working on. I’ll admit it was mostly about how to kill two major characters, which had me and a friend giggle incessantly (it was an evil girl thing, seeing as how they are both male characters). Now that I have a loose plot, I decided to work on character development.

I know it’s been AGES since I actually talked about WRITING, but I loved to use visual aides for my characters. I would search the internet to find a picture or pictures for each character I was developing. Guess who’s been using Google search for images? Oh yeah…that would be me!

So, I have my first character I’m developing all picked out. He’ll be my “comic relief” in a REALLY snarky way. Now, I must warn you, I’m pretty much writing this as therapy and have NO intention of thinking this will be some literary work of genius (it won’t be). But I do plan on having fun with it!

That being said let me introduce you to Algonquin, other-wise known as Quin. He’s a sparkly fairy person. He’s pretty damn pissed that he sparkles, too. I think that’s really what’s got a burr up his ass. He’s much wiser than any of he other characters, and I think he’s going to have some really cool super-powers (well, besides being all sparkly).

The best part about my characters is they are all going to be based on people. That’s why Quin sparkles…his human counter-part HATES all things sparkly (i.e. Twilight vampires).

I think I’ll save developing my main male characters for later….although I certainly know EXACTLY who they’ll be based on...and they have really sexy accents....all THREE of them (and here you all thought I was just gonna say "two", didn't you?).
Posted by TerriRainer at 12:12 AM No comments:

Into the Darkness I Descend...PLEASE?

I have used my blog many times just to work out my own feelings. Sometimes they have been very happy times, but more times than not, they are confusing or sad times. It’s just what I do; my own forum to say whatever I want. I’m typing this knowing I may, or may not, ever publish this to my blog (obviously I did).

There are choices we make in life we never look back on. We never question. My life was like that until about 4 years ago. The last four years have been a constant battle, mind over heart, heart over mind. I spent so many years, closed off emotionally, that when I finally opened up, boy did I open up. To the point of stupid.

There are things that even my closest friends don’t know. Things I have never shared with anyone. Often, our emotions lead us down very dark roads. Roads so dark, we can no longer see the path we should choose. I like the dark, I crave the dark. The dark enfolds me and makes me feel alive. I cease to just exist and start living while fighting my way through the dark.

Only problem with the dark? Well, you can’t see your nose in front of you, much less anything else. So while feeling your way through the dark, (because, let’s face it, you can’t , now can you?) how the heck do you know you’re making the right decisions? YOU ’T! Scary part, fun part, exciting part, STUPID part.

So into the light I have walked. Such a harsh reality. I don’t care for it, if I’m at all honest. It’s hard to hide all the glaring truths in the light. You can now see not only your own ugly side, but those around you who have hidden so well in your self-imposed darkness. I think I shall wander back into the gloom for a bit. I’m not quite ready to bask in the bright sun….yet.
Posted by TerriRainer at 7:20 PM No comments: